Below are examples of the type of programs the Norfolk Police Foundation supports either directly with funding or transportation support with donated vans.

An initiative created to bring officers, and residents of all ages together through a well-known American past time, the cookout. Norfolk’s finest host games, and fellowship over hot dogs, hamburgers and cold beverages. This initiative began in the backyards of citizen stakeholders in the summer of 2013. The cookouts are hosted in each of the 3 Patrol Division, and serve as a back drop for informal conversations with the officers of all ranks to include the Chief.

A partnership with the Southeastern Virginia Boys and Girls Club, allows youth and officers a monthly engagement opportunity to enjoy an afternoon meal together and learn a different facet of policing through demonstrations and static displays, at the Norview Unit of the Boys and Girls Club. Demonstrations are derived from various specialty units, to include Harbor Patrol, K-9, Forensics, etc. Youth and officers fellowship over a meal, play games, and learn the officer’s responsibilities through the static display. Cops and Kids began in the Fall of 2013. 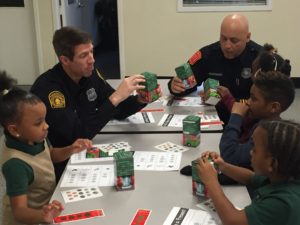 An annual formal event to encourage and motivate girls 6-13 years of age from under served communities. Officers engage and fellowship with the youth by way of fun and educational activities. Outside of the annual formal event, officers and youth enjoy back to school activities, conversations, and movie outings. The goal is to motivate and lift the self – esteem of youth from under served communities.

An initiative developed specifically for conversations between men and officers inside of Norfolk barbershops. Some of the conversations may be difficult, as they may be fueled by the local and national optics of officer involved shootings. The weekly weekend engagement inside the barbershops include answering questions regarding what to do when stopped by police, search warrants, and probable cause for search, etc. The barbershop is one of the most sacrosanct places for men to speak comfortably and frankly on a variety of topics. 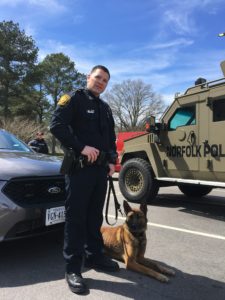 An initiative that began in the summer of 2013, when youth were represented as suspects and victims of gun violence. TWP is a creative arts youth group that shares the talent of teens, who use their voice to address or highlight social ills/joys through poetry, song or acting. Officer’s engage with teens regarding the local and national optic of officer involved shootings, what to do when stopped by police, and probable cause, etc. Officers and youth participate in partnership with spring break camps, forums, summer festivals, and bicycle camps.

The Norfolk Police Youth Academy is an initiative that seeks to engage youth via engagement with officers through specialty unit demonstrations, static displays and mentorship and discussions regarding character and ethics. Each youth academy is specifically structured to meet youth where they are. Youth academies are often hosted at recreation centers, churches, and schools, from 1 week to 3 months. Norfolk Police Youth Academy has served over a thousand youth over the last decade.

The purpose of the Police Athletic League is to provide recreational activities for youth as an alternative to involvement in activities that could lead to criminal conduct or gang involvement. The Police Athletic League also seeks to foster positive and trusting relationships between police officers and Norfolk’s youth. Badges for Baseball and the Summer Youth Camps. Badge for Baseball is for boys and girls, 7-16 years of age, and runs from April through mid-summer. Each year PAL host 2 youth camps in July and August. Both PAL initiatives allow for positive engagement through physical exercise, mentorship, and sportsmanship.

An initiative designed to support youth with improving concentration and memory, reading and math skills, and fosters critical thinking and creativity.  Officers and youth meet at the Richard Bowling Elementary school.

Below are examples of the type of programs the Norfolk Police Foundation supports indirectly through our coordination and partnership with other volunteer and philanthropic organizations who share our passion for supporting the Police Department in their community outreach efforts.

During the summer of 2014, it was determined that Norfolk Police recruits would be required to develop and execute a community engagement activity or initiative for residents, before they graduate. This initiative further serves to develop greater empathy for demographics and communities they have not interfaced with previously.

Norfolk police and Norfolk clergy work in tandem on weekends to positively affect community engagement and calm in neighborhood in the wake of an incident. Clergy Patrol teams are dispatched to each of the 3 Patrol Divisions from 8:00pm to Midnight. The goal is to allow clergy to assist residents outside of harm’s way, after a crisis, through prayer, calm or consultation. Clergy are dispatched in communities that are known to them, and where residents may be familiar with their reputations as stewards of peace.

The Citizens Police Academy is a 3- month program that allows Norfolk residents an up close view of the operation of a police department. Officers from various Units serve as the instructors to residents for 12 weeks, once a week, at the Norfolk Police Training Center. Citizens who participate in this engagement are vested citizens for safe and healthy communities, and understand the benefits of community policing, and partnerships with law enforcement. The Citizens Police Academy has been a source of community engagement for over 20 years.

Coffee with a Cop

A national initiative that has been introduced to citizens in Norfolk since the summer of 2016. Officers engage with patrons for up to 2 hours at coffee shops or eateries, and discuss a host of topics, from the weather, to trending incidents. Location of engagement is announced via the Departments social media platforms, broadcast and print media, and NextDoor. The goal of this initiative is to meet another demographic of residents from where they are, for convenient engagement with law enforcement.

A program much like the Norfolk Police Youth Academy, the Criminal Justice Explorers Academy, is an initiative that was developed to further peak the interests of select high school students who have a desire to learn more about law enforcement, and the possibility of a career in law enforcement. The Explorers meet weekly over a 3-month period and are introduced to nearly every facet of the Norfolk Police Department. Participation includes a structured curriculum with mock investigations and study materials.

Norfolk Police partners with several agencies and city departments to host 3 forums each summer, in each of the 3 Patrol Divisions across the City of Norfolk. The 4 hour forums serve to educate parents and youth about the signs and pitfalls of gang influence. Each forum is free and provides lunch a beverage to each attendant. The gang forums began in the summer of 2014.

In partnership with the Life Enrichment Center of Norfolk,
a faith based community agency that serves to improve literacy by way of weekly tutoring for one hour, in Title 1 Norfolk Public elementary schools. More than 50 Norfolk police officers currently serve as tutors for a complete academic calendar year. Since officers began working with students in 2014, reading scores have improved. The PLUS initiative will assist in the development of positive relations between the youngest Norfolk citizens and officers, for a new generation of engagement.

a partnership with Norfolk Animal Care and Adoption Center, created to increase awareness for animal adoption. The partnership is featured exclusively on Norfolk Police Department social media platforms. Officers are photographed with animals that are ready for adoption. Norfolk’s Finest and Furriest began in the Fall of 2013.

Services of volunteer chaplains are made available to the members of the NPD and their families and under certain circumstances, members of the public, for the purpose of providing services of a secular nature such as crisis intervention, counseling, emotional support and comfort and non-sectarian spiritual support, in times of need.

An annual crime and drug prevention event as well as community-building campaign that promotes police-community partnerships and neighborhood camaraderie to make our neighborhoods safer, better places to live. Participating neighborhoods nationwide are asked to participate by spending the evening outside with neighbors and police.

The Community Affairs Section Officers serves as the Speakers Bureau for the department. A significant amount of youth presentations is conducted throughout the year in schools, recreation centers, day cares, and churches. A variety of topics are covered that include but are not limited to Bullying, Drug Awareness, Gun safety (Eddie Eagle Program), and Gang violence.

WE Are ONE – NPD And YOU

A unique broadcast partnership with TBN Broadcasting Group. Every 1st and 3rd Thursday officers answer live phone calls and questions from listeners on WGPL-1350 AM regarding community policing, crime prevention, citizen engagement, and recruitment. This community platform also serves to highlight officer customer service. This platform began in the Fall of 2013.